Navigator has turned out to be the surprise package of the whole bunch, 300 plus sets of plans in today’s market is a lot! Navigator was designed for Boat Books Auckland’s proprietor Tim Ridge as a race trainer to serve the needs of a local club!

Originally she had the rig shown on the study print below, a crew of three teenagers totaling about 150 kg was intended, with its big sloop rig and shallow draft centerboard, to reward good sailing technique in a fairly open and windy club venue. There have been quite a few of these built, and I am told that they are very good boats, much enjoyed by their owners.

But, the surprise came with my friend Bob Jenner who came to me wanting a long range cruising dinghy just a little bigger than his Rogue.

We sat down for a browse through my drawings for some inspiration and Bob was very taken by the hull and internal layout of Navigator but wanted a rig with very different priority.

We took the standing lugsail that Bob had liked from Rogue, powerful but very simple and easily handled this is a good sail for a cruiser, we then looked at a means of balancing the boat in severe wind conditions as well as trying to make the boat as easy to sail as possible.

I had used the yawl rig in other small boats and had succeeded in making the boats self steer on the wind with little more than a piece of shock cord on the tiller, in this case I organised the sail proportions to have the boat balanced with either main alone, or mizzen and jib only. This means that in a really hard chance the main halyard can be cast off and the boat is still able to be steered and handled when things are very bad.

Another consequence of the sail layout is that the mizzen can be sheeted on hard, then the boat will lay comfortably hove to head to wind while the crew take a break, very nice if a hot drink or meal is to be prepared on the go.

We looked hard at the seating, side decks and helm so she is really comfortable, there is space for up to six but she is still an ideal singlehanded cruiser.

Bob needed lockers, enough space for a weeks gear stowed securely and out of the way of the spray, a space for the little outboard and 2 a place for a little ballast ( in his case wet sand l in bags alongside the centrecase). So we have an anchor well keeping the muddy “hook” and l its chain out of the main part of the boat, a big locker under the foredeck, big lockers under the side seats and in the sternsheets.

All of these are sealed off with watertight screw ports or hatches so that there is enough enclosed air space to float the boat really high enabling her to be righted and bailed if swamped. In fact when we tested a later boat she supported her crew comfortably and was easily bailed to get back under way.

Bob built his Navigator over about 4 months, the simple glued plywood lapstrake over stringers construction proving both fast and economical, the lightweight hull went together surprisingly quickly in the single car garage and it wasn’t long before we were down at the waters edge christening her with lemonade.

We launched her on a very windy day and had a really good time, rocketing around the bay until the (very) second hand wooden mast gave up. It had screw holes filled with putty and painted over right around the deck area and putty isn’t very strong!

It wasn’t very long though until we had her fitted with a piece of alloy tube in place of the wooden stump and “Ddraigg “ was off on what turned out to be a very distinguished career, we cruised her, we raced her with a lot more success than most people thought would be the case, we daysailed her and all in all she did more mileage than almost any open boat I’ve seen.

Performance wise she is a real surprise, very fast in most conditions, close winded and easily handled, the hull, though light is seaworthy and stable, powerful enough to drive through a big wave and she has a surprisingly comfortable motion in the open sea, something that is not easy to achieve in a light dinghy hull but a real bonus in a boat which may be at sea for a whole day on some coastal passages.

This yawl rigged version of Navigator has been really popular, there are Navigators as far north as Finland, Norway and Denmark, and as far south as Invercargill ( 47° deg south, really roaring forties territory). We have had a letter from an owner who sailed from Torquay in England along the coast, across the English Channel and north past France and Holland, ending the odyssey in Sweden! A very long way in an open boat, but as the letter said, the only long voyage was the 32 miles of open water as they crossed to France and from there on it was ten or twenty miles at a time.

In spite of the original club project not going ahead, they opted for an existing class boat, she is my most popular single design.

There are groups racing with three clubs that I know of and we even have an informal “owners group“ who promote dinghy cruising and the design has been built in many variations including several with cabins ( which I feel are just a bit too small, watch this space for a bigger version named Pathfinder with a cabin as an option later in the year) and has somewhat humbled me with the enthusiasm with which she has been received, She is my favourite, one of those happy coincidences of fate, and perhaps one day I’ll have one of my own. 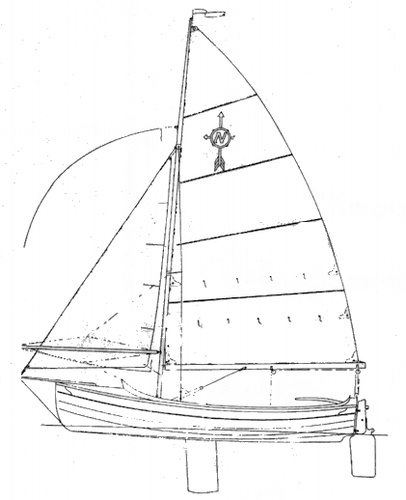 Boats about same size as Navigator