There has been a lot of enquiry for a “bigger Navigator”. Someone said, “One with room to sleep on a nice flat space that doesn’t need rearrangement of the floorboards to stretch out”. Another said, “I have a family which is effectively four adults, and while Navigator will accommodate that many, we’d like a boat just like that but stretched a bit”. Others wanted more speed or more range, a motor in a well inside, room for more gear, and so on. Lots of enquiries.

I had in mind a really serious cruising dinghy. With full buoyancy, lots of storage, about the maximum size that two people could right if swamped in a hard chance, really capable in a head sea ( a weakness in almost any small boat) and capable of making some sort of progress in really nasty conditions. A boat still really well adapted to exploring an estuary with the family, cruising along a sunny coast or even just knocking around the bay while Mum and Dad have a quiet snooze on the beach, but capable of fulfilling the dreams of those who read Frank and Margaret Dyes stories with far away looks in their eyes, capable of really covering some miles, and capable of doing so in the sort of weather that will eventually catch up with every voyager.

My experience in sailing Navigators led me to strongly favour a rig similar to the yawl rig so popular on that design, she can heave to head to wind with the mizzen sheeted hard on with the jib and main sheets flying, will balance and sail well on jib and mizzen only in really awful weather, can be sailed forwards, sideways or backwards and will self steer on most points of sail. One really good point of this rig is that the main lies straight down the middle of the boat when you are putting a reef in, much easier than a sloop where the boom invariably hangs over the side.

I have though drawn a gaff sloop rig for those who like to race in the old gaffers events, or who are into daysailing more than cruising, it will offer more speed upwind and slightly more downwind due to the greater projected area of that big main, but for me the versatility of the yawl is hard to beat.

I’d drawn the hull years ago, and built a scale model. The numbers were all done and for some reason she ended up being put away. I did pull the drawing out now and again, I even asked the guys on Openboat forum (A yahoo group) what they’d like in the way of a serious cruising dinghy. Very recently the clamour got too much and I spent a couple of days on her. The shape got altered a little to incorporate some design lessons learned and I have almost all of the plans done. I’m very pleased with the way she is shaping up.

This boat has a very high power to weight ratio, her extra length over the 15 ft Navigator means a lot of extra sail carrying ability and still having the fine lines necessary for speed and comfort, I really like the rig, the gaff headed main is very controllable and the extra spacing between the main and mizzen will help the boat point well. She’ll be a rocket reaching and running and I suspect that it will take a very good boat to get away from her upwind.

The shape forward should mean she is a dry boat, and the big foredeck and wide side decks will help the crew to stay out of the spray, there are lots of dry storage spaces for camping gear and stores, and the swinging centreboard and rudder mean that she can be sailed into water as little as knee deep.

The construction method is the same as Navigator, a flat bottom panel substitutes for a keel, plywood frames are cut out and erected on the bottom panel and stringers bent around, then clinker lapped planks are laid over those. Most Navigator builders have never built a boat before and I expect that Pathfinder will be the same so I’ve stuck with my tried and true methods.

She should take an experienced and motivated builder about 225 hours unpainted, you can think how much slower your own skills would be in comparison and get an idea of how long she would take you. She’s not beyond a winter of evenings for a couple of keen friends and even for one it would not be an impossible task.

I’m looking forward to seeing some of these around; being honest I want to borrow one! 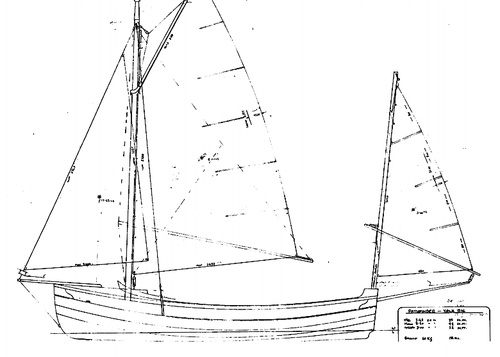 Boats about same size as Pathfinder