A daysailer with sneaky speed

Many designs start as an idea brewing away in the back of my mind, and are only brought to the fore when a prospective client enquiries for something that fits the idea.

Rogue was one of these, I’d been thinking for a while about a fast, general purpose sailing dinghy that would row and outboard, all things which are not usually compatible and the compromises to make the boat work in all modes often mean that she doesn’t do any of them well.

My experiments with a series of open boats had given me some experience and thoughts on proportions, construction methods and layout, so when Bill Harford rang, wanting a light but roomy outboard motor powered dinghy for fishing around Northlands Cavalli Islands I was already halfway there in terms of how I was going to approach the project. Then Peter Elstone phoned from Napier wanting a sailing dinghy to carry two friends and a pile of camping gear around the lakes and inlets to which he would trail the boat.

After the proposal sketches were accepted by the two clients I started the serious part of the design process, but due to other commitments it took a little longer to finish the drawings than I would have liked and I remember going to the copy shop and sending off a sheet at a time, hoping I was staying ahead of the two builders.

About the same time I sold my own boat to a man who threatened me with a chequebook, (totally unfair tactics ) and, in order to have a boat for the summer I got stuck into building one myself, she took eight weekends and quite a few midnights to get finished. Rogue and I had a really good time that summer, covering about 1500 miles around the Hauraki Gulf and the Kaipara Harbour.

Sailing the boat was everything I had hoped for, and during the year I kept her she was raced with a surprising degree of success, something that has been the experience of other owners. She aquitted herself honourably in the two pair oar class of the Weiti River Rowing race finishing second (with two passengers aboard, the race is not a serious one but once the gun goes all friendship ceases) I camp cruised her a lot. I was single at the time and had few commitments so had time to explore the many bays and estuaries in the area. She proved to be just about perfect for the job, and there were times when I took friends away for a weekend, cruising in this little boat put a new face on yachting for a few lucky people, several of these people are still out there cruising in their own small boats.

In addition to the big voyages she turned out to be ideal for those lovely afternoons when being anywhere but on the water would be second best, and as a daysailer she is capable, comfortable, fast and very quickly rigged.

This design won the 1988 Traditional Small Craft Society Beach Cruiser design competition, with her traditional styling and rig, built from modern materials and with an efficient underwater shape she gives away nothing in performance while retaining her classical looks. Those who have built her have been very happy with the performance whether pottering about an estuary, making longer passages with camping gear aboard or using an outboard motor to putt out to the point to do some fishing. 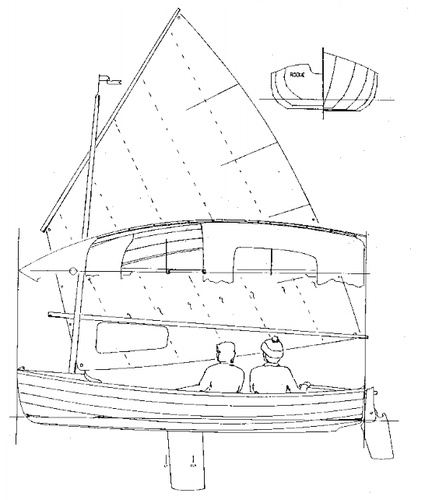 Boats about same size as Rogue