A little load carrier that can become an explorer

I had an enquiry from a liveaboard couple who needed to cover the two hundred yards or so from the town jetty to their forty footer, two "mature adults" who described themselves as a little under exercised and not as agile as they once were, two fat Labrador dogs that had to be dry when thy went aboard as nosepegs are only partly effective in blocking the smell, and groceries to transport as well.

I asked as to the maximum accommodation aboard and was told that they had three doubles, and I know that after a congenial dinner ashore the prospect of making two or three trips to ferry everyone out there is not attractive, and yet the little boat had to stow in a limited space aboard.

Designing the tiny tenders that service the big boats is an exacting task, the requirements don’t stop with the late night ferry operations, they include being the getaway vehicle when moored in an anchorage, a play toy for the kids, a private space for a skipper or crewmember too long confined aboard and a service platform for looking after the parent vessel.

So I took the space available on the deck, and the construction and style of the fat little "Tender Behind" I drew for my maths teacher years ago, the need for six people and stability enough to account for a drink or two. I rigged her with enough sail to make good progress, a nice simple rig that will only take a couple of minutes to set up and with short spars to make stowage easy. I made a cutaway in the transom for the ubiquitous little outboard motor, but added a proper pair of rowlocks so she can be rowed effectively when needed.

Construction is as simple as I could devise, she has a flat panel bottom for stability, the frames are cut from plywood and are set up over a central spine which aligns them and also forms one side of the centrecase. Stringers wrap around the frames from bow to stern and ply planking is fitted over those. The seat tops form buoyancy tanks at each end, tanks that contribute to the stiffness as well as providing good seating.

She is very strong, light enough to manhandle, and has enough stability to be a really fun sailor, as well as being steady enough for the times when you are trying to heave a box of provisions up over the rail, you can stand up in this boat, you can get your six people aboard in calm weather (and still row) and with her usual load she is as capable in a wind over tide dark night chop as anything that you will find of this size.

Sherpa? A hardy race of people native to Nepal, small in stature, but who can carry heavy loads in mountainous conditions. 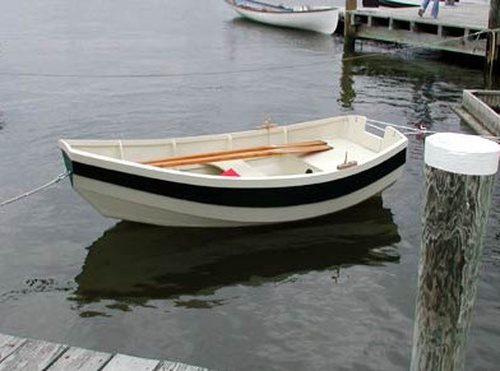 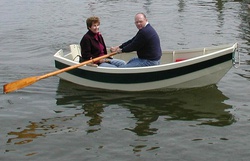 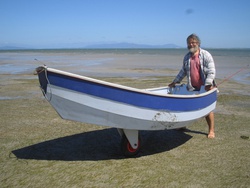 Sherpa on a wheel 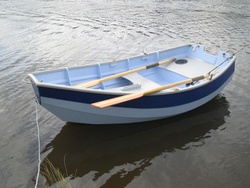 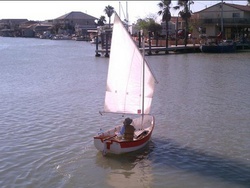 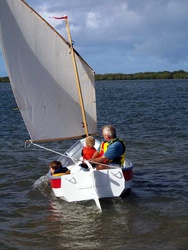 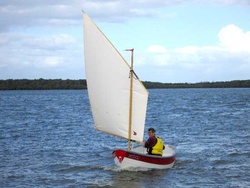 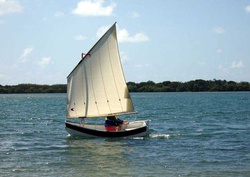 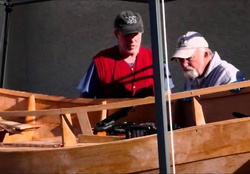 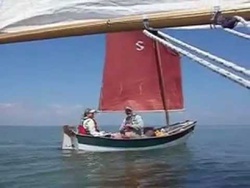 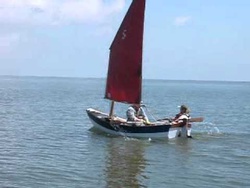 Sherpa Rowing
Lack of wind forced us all to row some during our trip from Rockport to Seadrift, Texas. 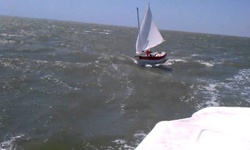 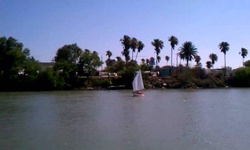 Boats about same size as Sherpa