The idea of a minimum building time general purpose skiff had been lurking in the dim recesses of my mind for quite a while, mixed up with a whole lot of other odd things and not going anywhere much when Sea Spray editor Shane Kelly and I were talking about the best way to set the world to rights and bewailing the cost and complexity of the plastic or aluminum boats being offered the unsuspecting who just needed something simple from which to dangle a fishing line. My “idea” surfaced and we decided that in order to cure this particular one of the worlds ailments we would work up an alterative.

I was to produce a design for a simple skiff that could be built in one weekend and finished off during the evenings of the following week. Shane would publish a complete set of plans and instructions over a couple of issues of the magazine and we could sit back and enjoy a world that was a little better than when we began.

As so often happens the best laid plans of men, mice and editors went awry, the company that owned the mag decided on a complete revamp including a change of name ( now New Zealand Boating World) and shortly afterwards Shane was made an offer that he could not refuse by a publisher in a completely different field. I was still contributing to the magazine but the new editor had enough on his plate for the time being and it took quite a while for the project to surface again. However, it all went well in the end, Ancris Associates came up with the glues, resins and surfacing compound, Gordon at Plywood and Marine Supplies donated the ply. Geoff (then the new editor) and I got on very well and we were away again!

She’s not intended to be graceful, but has an air of surefooted (sure finned?) safety which her performance lives up to. She can carry a considerable load in a good chop and will row better than most things her size. Construction is very easy and in fact the Fish Hook” building system was so successful that similar techniques have been included in the sports rowing boat “Seagull” and the ‘Golden Bay/ Setnet’ dinghy. 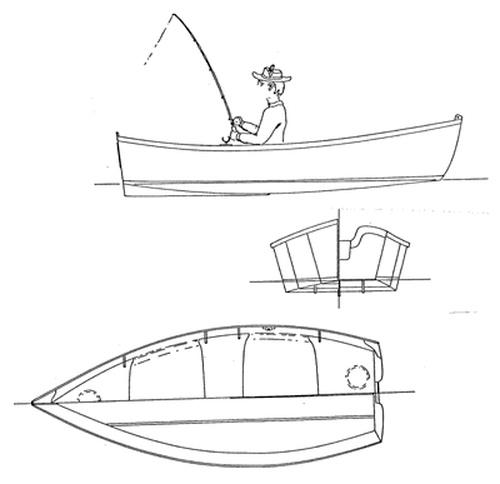