In the 10 years that we have offered plans for the Didi Mini, we have sold plans for 90 boats. Apart from a redesign of the aft deck and a continual expansion of build options, it has remained the same basic boat sold as the Didi Mini Mk2. Now we introduce a major redesign, as the Didi Mini Mk3. It has some major changes from the earlier versions while retaining the same basic structure and detailing. It remains suitable for amateurs to build economically but performance will step up a notch or two.

Introduced in the Didi Mini Mk3:

Overall, these changes produce a boat that will be more powerful, faster, more weatherly and more comfortable to sail.

Detailing is based on the series of radius chine plywood designs that started with my DIDI 38 "Black Cat", and was followed by the DIDI 34, Didi MG30 and DIDI 26. The underbody has been reworked to allow a topside chine to be added to power-up the aft sections. The chine is formed by stitch & glue methods and fairs into the hull side just forward of the mast, with the bow sections remaining the same as the Didi Mini.

Design principle is simplicity and to the Mini 6.5 Class limits. The design includes options of a fixed keel with conventional port & starboard water ballast tanks or a canting keel with forward daggerboard and bow and stern water ballast tanks. For the fixed keel version the tanks increase sail-carrying power. For the canting keel version the tanks allow the bow to be trimmed down on windward legs for improved windward ability or the stern to be trimmed down for offwind performance in strong winds. The daggerboard can be tacked inside the casing for increased lift. Linked twin rudders are steered by central tiller.

Keels are hollow aluminum fabrications with through-bolted beaver tail ballast bulbs. The fixed keel has optional trim tab. Both keels are supported by the hull structure by means of an internal aluminum box frame. The fixed keel has an integral post to transfer some of the keel loads through to the deck structure.

The deck layout is a fairly conventional 3-winch arrangement. The smaller headsails sheet to the top of the cabin and are led to the cabintop winch. The larger headsails and spinnakers sheet to the cockpit winches. Tweeker lines replace headsail tracks.

Spars can be either carbon for performance or aluminum for reduced cost. If an aluminum mast is used then the ballast bulb must be 10% heavier to maintain stability in the test condition.

Pre-cut hull, deck and bulkhead kits will be available from various suppliers. Click here for supplier contact info. Please clarify with suppliers what is included in their prices.

We continue to sell plans for the Didi Mini alongside the Didi Mini Mk3 because there are builders who still prefer to build the older design. 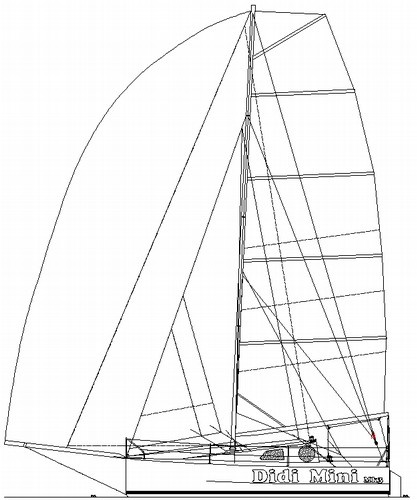