A compact and fast cruiser racer with good performance which you can build for yourself from plans, this is a smaller sister to the DIDI 38 which I designed and built for myself in 1994/95, as a prototype for the radius chine plywood yacht concept. She is a bit more cruising orientated than the 38, which has more downhill racer in her. In many respects she is also an updated version of my CW 975, the design with which I won the 1979 Cruising World Design Competition. I built one of those boats for myself and sailed her for 7 years before designing the DIDI 38.

Drawn to be a good all-round performer, the Didi 34 will be able to account well for herself in round the buoys or passage races while still being a comfortable small cruiser.

Construction is radius chine plywood, drawn for ease of construction. I built the first DIDI 38 myself in my garden to prove the innovative methods of construction which I designed into her, to achieve a strong and light structure which could be built by people with average handyman skills and a very modest budget.

Her lines are thoroughly modern, with short overhangs, fine bow at the waterline and moderately powerful stern. Sections are slightly Veed throughout the length. The forward underbody has been shaped to develop dynamic lift to keep the bow up at speed and promote surfing.

The hull has moderate beam and is well flared to give a narrow waterline, reduced drag and improved comfort at sea. Light and beamy boats are not comfortable in a seaway. After having crossed the South Atlantic twice on my DIDI 38 I can vouch for the comfort of a light boat of moderate beam.

Draft of the standard keel is 1.9m but the drawings also include a shallower option of 1.5m draft for shallow water areas. Stability is similar with both keels but the shallower one is heavier, so performance on all headings is reduced.

The mast is deck-stepped on top of a post aft of the main bulkhead, structurally the most sound solution for a timber boat. It places everything below the mast in compression rather than trying to force the hull and deck apart, as happens with a keel-stepped mast. It also eliminates the problem of water going below through the mast and collar.

Down below, the layout is based on a feature found in most of my designs, the midship engine. It gives excellent access for maintenance, places the heavy weight at the optimum position to reduce pitching and allows a flatter after underbody because the weight is not having to be supported as far aft. It also allows a good seagoing U-shape galley to be built around the engine, with centreline sinks.

The saloon settees are integral water tanks and the saloon table is a box in two sections. The lower is an epoxy coated plywood fuel tank and the upper is a storage compartment.

The separation between sleeping cabins makes her well suited to small family or two-couple cruising, with the settees serving as alternate berths for bad weather. The aft heads position is prefered by most women. The lazarette is large and has compartments for liferaft, gas and batteries.

My DIDI 38, "Didi" (previously named "Black Cat") has lived up to all of my expectations in her design concept. The DIDI 34 will do well for anyone wanting such a concept but in a slightly smaller package. 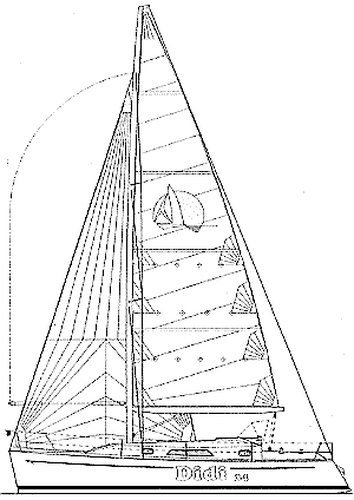 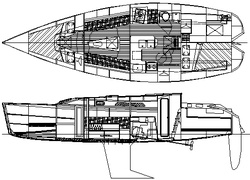 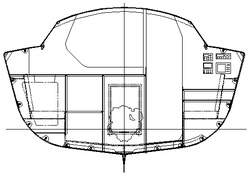 Boats about same size as Didi 34