Construction of this yacht is radius chine plywood, drawn for ease of building. I built her myself in my garden to prove the innovative methods of construction which I designed into her, to achieve a strong and light structure which could be built by people with average handyman skills and a very modest budget.

Offwind performance was a major priority with this design and on headings with the wind aft of abeam she will sail with most 50 footers. Efficiency upwind was not forgotten and here she can hold off challenges from most yachts of similar size.

Her lines are thoroughly modern, with short overhangs, fine bow at the waterline and powerful stern. Sections are slightly Veed throughout the length to give a large planing surface, efficient when upright or slightly heeled. The forward underbody has been shaped to develop dynamic lift to keep the bow up at speed and promote surfing and planing.

The hull is fairly slim and well flared to give a narrow waterline, reduced drag and improved comfort at sea. Light and beamy boats are not comfortable in a seaway. After having crossed the South Atlantic twice on my DIDI 38 I can vouch for the comfort of a light boat of moderate beam.

Draft of the racing keel is 2,25m and we have two shorter cruising keels as well. All are fabricated from steel plate over a simple tube skeleton and are lead filled. They are through-bolted to the hull and supported by the internal I-beam backbone and laminated ribs. This results in a stiff and watertight hull/keel structure.

She can also be built with the stern overhang extended by 0,57m for better performance due to increased sailing length and cleaner wake. Overall length increases to 12.07m (39' 7").

The mast is deck-stepped on top of the main bulkhead, which is reinforced with timber posts. This is structurally the most sound solution for a timber boat. It places everything below the mast in compression rather than trying to force the hull and deck apart, as happens with a keel-stepped mast. It also eliminates the problem of water going below through the mast and collar.

The fractional rig has double swept spreaders, giving a stable setup which does not require runners. This eases handling by a small crew.

Down below, the layout is based on a feature found in most of my designs, the midship engine. It gives excellent access for maintenance, places the heavy weight at the optimum position to reduce pitching and allows a flatter after underbody because the weight is not having to be supported as far aft. It also allows a good seagoing U-shape galley to be built around the engine, with centreline sinks.

The forecabin has a full width double berth with loose tops which can be removed for racing, leaving a large sail locker.

The saloon settees are integral water tanks and the saloon table is a box in two sections. The lower is an epoxy coated plywood fuel tank and the upper is a storage compartment.

There are two double quarter berths aft, the starboard one in an optional private aft cabin. Right aft is the lazarette accessed from the port quarter berth via a bulkhead opening. This eliminates the possibility of endangering the vessel through a lost cockpit locker lid.

For a performance yacht she has a lot of joinery but it is light and strong. Drawn initially for the Cape to Rio Race, stores and gear must be carried for 5 crew for 4 weeks. A lack of proper stowage results in a disorganised boat which is bad for crew morale and dangerous in an emergency. Good stowage improves her all round with little weight gain.

This is not a hi-tech boat, rather being one which can give performance satisfaction to those who want to sail close to the hi-tech guys but without the high cost. She gave us 248 nautical miles in 24 hours, a top speed of 17 knots and an incredible period of an hour in pitch dark mid ocean when our boatspeed remained over 13 knots. She has also regularly featured in the prizes in local short-handed and coastal passage races. In the 2000 Cape to Rio Race she came close to 22 knots boat speed.

My "Didi" (previously named "Black Cat") has lived up to all of my expectations in her design concept. I would recommend her to any potential amateur builder who wants a performance design which he can build for himself at reasonable cost.

We have received many enquiries about a more cruising oriented version of the Didi 38 than the racing image of our "Black Cat". In response we now offer a more conservative masthead rigged version. It uses the same fore-triangle as the fractional rig so headsails, spinnakers and deck layout are identical. The difference comes in reduced mainsail size and rig weight, as well as lower centre of effort.

Along with the smaller rig, there is also a shallower keel. Draft is reduced from 2.25m (7'4") to 1.8m (5'11") to give access to more harbours. It is of the same weight but has a larger bulb to keep the CG low for safety for trans-ocean use.

Some of the Didi 38s are being built with 18mm (3/4") hull skin instead of the standard 12mm (1/2"). This further increases the strength and stiffness of an already strong concept, producing a great fast cruiser. 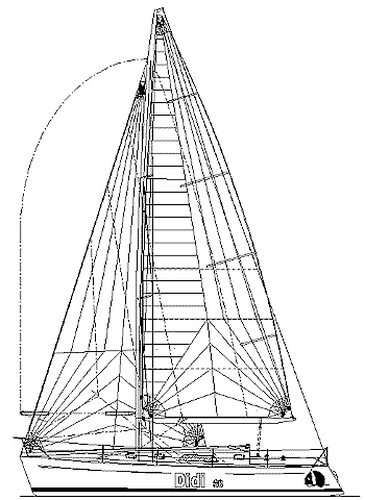 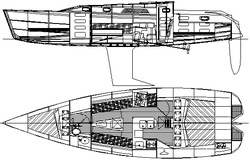 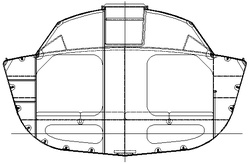 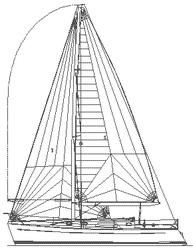 Boats about same size as Didi 38