Most languages have a word which conveys the image of the wanderer, someone who has a dreamy far away look in their eye, who stays for a day or three then moves quietly on toward a goal that no one else can see. "Pelegrin" is one such word, from the old Norman French it means "Pilgrim" or "Traveller". Ever moving on, apart from the world but observing, watching, learning, remembering, and following the dream.

Boats, especially tough little cruisers, are a natural fit for this sort of imagery, we all of us have thoughts of escape, leaving the stress for a while and floating lightly through life, free as the wind which moves us.

The name given to a boat should reflect its place in its owners life, and that’s the intention here. A tough little ship, one in which dreams can be pursued for a week or two at a time. Big enough to be comfortable for two, small enough to tow behind a normal family car, seaworthy enough to cope with being caught out in bad conditions, and small enough to be a reasonable build for someone with the inevitable commitments that we all seem to accumulate.

The design philosophy here is one that I’ve been developing for some time now, the starting point being some research into the small working sailing boats of the English South Coast circa 1880, these were uncommonly seaworthy and capable little craft, unassuming but an essential part of their community. They were the Chevy pickups, the vans, the minibuses, the freighters and the fishermen of their day, substantial investments for their owners they had to perform, and did.

From these I developed a hull form that has similar characteristics to these working boats, seaworthy, comfortable, able and faster than you’d expect. Being of simple construction, intended for someone with no boatbuilding experience they use common materials, easily handled, marine glue and fastenings, ordinary handyman level tools and a few hours a week to produce the vessel in which those dreams can be pursued.

The rig is in keeping with the tradition, and the ballasted full keel ensures a degree of stability that few trailerable boats of this size will match.

There is space below for four to chat over coffee or cards, two decent bunks that make overnighting comfortable, and enough headroom to move about without risk to the scalp.

Storage is plentiful, and there is a bench where a picnic stove can be used to cook at the end of the day. A portable head can be stowed in its own locker under the companionway steps, and there are bookshelves under the side decks.

The cockpit will seat 6, but four is as many as you’d want to take sailing for more than half an hour, but those four could be away for the day, or if they are younger the cockpit could be tented and the seats will double as bunks so mum and dad can weekend away with the kids.

There are a couple of big lockers out there, big enough for the spare anchor, motor fuel, fenders, bimini or awning and an icebox. Good stowage keeps the boat tidy, and a tidy boat operates well.

The outboard motor fits in a half well so there is no need to hang over the stern to get it running or work the throttle, but it wont fill the cockpit with fumes either.

Up on deck the mast is fitted in a tabernacle, that makes it easy to rig even single handed, and with its versatile and powerful gaff mainsail the mast is relatively short making it easier to handle and short enough to avoid overhangs when on the trailer.

Almost all of the rigging can be left in place when the boat is unrigged and on its trailer, I set up my own boat of a similar style in about 20 minutes, and can unrig in less than that.

With a roller furling jib and "slab" reefing there is no need to go up on deck to reef this when the wind pipes up, you can stay safe in the cockpit, and even singlehanded its an easy job to manage the rig.

Anchoring is an easy job too, the big well up on the foredeck carrying the main anchor ready to lower away, complete with chain and rope, its stowed where mud and weed wont get tramped back into the cockpit and from there into the cozy haven below.

Looking over the plans, I can see a space for a decent sized battery that will run the radio, cabin and navigation lights, room to stow a weeks provisions, space enough for comfort and a cabin that would make a very nice miniature home for a week away from the rat race. 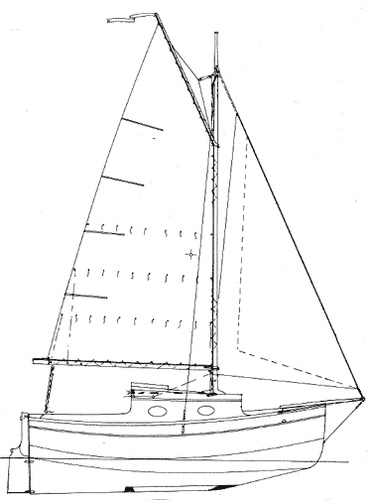 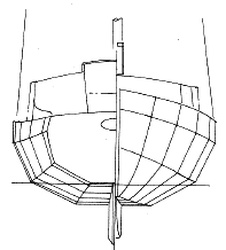 Boats about same size as Pelegrin