A tough little cruiser for one or two

Fafnir came about in part because of a customers want for a very small blue water capable yacht in which to attempt a non-stop circumnavigation. He was wanting to build a 10 ft long boat, and I had serious reservations about this so expressed some reservations. Much against my better judgement and out of curiosity more than anything I worked out a route, the amount of current assist that was possible, the weather windows and the climatic and stores consumption issues.

Its not possible in my opinion to do it in a 10 footer, although the original customer will be trying to prove me wrong with another designers 10 footer. I’m a bit relieved to tell you the truth. That’s a long voyage with high risk and a good chance of the skipper running out of provisions a long way from any possible landfall.

The issues surrounding the design of very small long-range boats are many, are complex and interrelated. Fitting the skipper into the boat in some comfort is one, there needs to be a variety of sitting and lying positions, places for fixed equipment such as the cooker and every possible space made available for storage. Issues such as stability when on deck, change of trim as the skipper moves about, visibility from the several possible steering positions, and security during knockdown and rollover all have to be considered, and that before, or at least in conjunction with the sailing ability and characteristics which in themselves need to be quite different from a small boat intended for daysailing around the bay on a sunny afternoon.

I drew the minimum boat that I considered workable. At 4M (13 ft 1in) long it can carry about 350 kg (770 lbs) of stores in addition to the skippers weight and an allowance for the boats equipment including the liferaft and safety gear.

While that’s not a lot for a 380-day voyage, with a hand operated Watermaker Pump it makes the trip just about possible if everything went absolutely right. I don’t think for a minute that it would, but it does mean that anyone wanting to spend a month aboard while running down the tradewinds toward a set of white sandy beaches and palm trees a thousand miles or more away there will be plenty aboard to sustain life, even enough books to prevent tedium taking over.

As often happens rumours about the new design circulate and I get others interested, some of whom get a chance to have an input. In this case a gent who lives in an apartment with a separate singe car lockup garage was very interested in a blue water cruiser that he could build in that space. In this case the 6m x 3.6m space was ample, and the structure was kept very simple so this first time boatbuilder could handle the project without having to learn complex skills.

This is a very simple boat to build. I’ve been careful to keep the structure within the capability of a novice builder so she’s built of stringers and plywood planks over plywood bulkheads. This makes her very very strong, and a lot more capable than most would think a boat of this size could be. For someone with large dreams and a small budget, Fafnir might just be the ideal thing..

There is space aboard for two, a slightly different layout from the blue water single handers setup provides a double bunk, and a friendly young couple would find that there was enough room on board for a long weekend or even a week. The boat can be trailered behind a four-cylinder car and transported to a new cruising ground each holiday weekend, and while its capable of long distances in areas where the winds are mostly favourable she might be containerised, or railed out to somewhere exotic if something really adventurous is the aim.

I can imagine the skipper heading off out of a tiny harbour at the far end of a small shipping lines run, the tiny bimini sheltering him from the hot sun so different from the cold winter weather back at home and bearing away to run down the steady trade wind on his way to the island chain some 1500 miles away where his young wife waits for her captain to bring their ship in so they can explore the new and exotic coastline together. 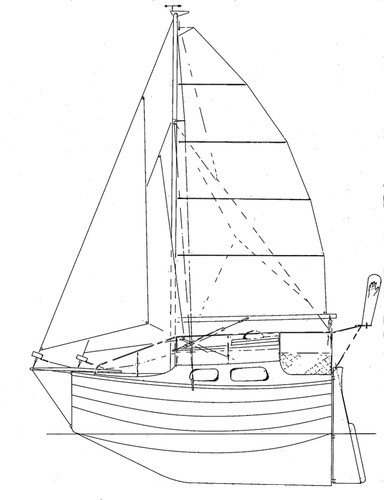 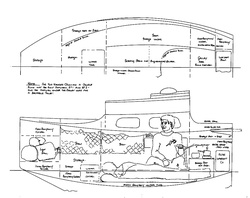 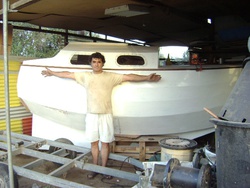 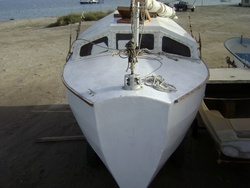 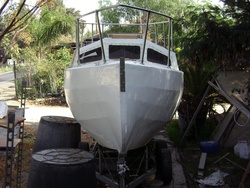 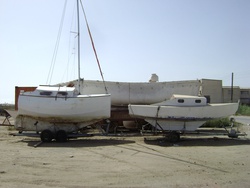 Huge boat for her length 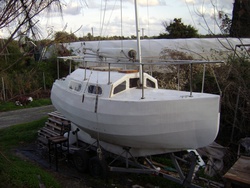 Fafnir at back yard 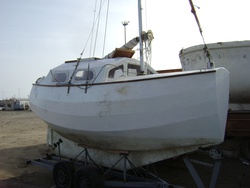 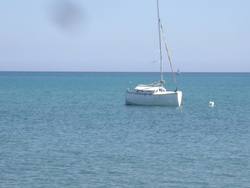 Fafnir on the water

Boats about same size as Fafnir