This design was commissioned by a client who likes the concept and features of the DIDI 26 but wanted a more classic appearance. He plans to build it himself in Hout Bay, South Africa from a kit supplied by CKD Boats.

Most of the boat is the same as the DIDI 26, with some obvious differences. The springy sheer curve was achieved by adding bulwarks that are 100mm (4") high in the bow and taper down to normal toerail height for the length of the cockpit. This gives safety for working the foredeck but allows crew to sit comfortably on the rail at the cockpit.

The cabin has been changed to a more boxy traditional configuration with the sides and ends close to vertical. The roof has compound curves that might mot be easy to skin with plywood, so it will be done with strip cedar glassed over. The cabin is a bit narrower, giving wider sidedecks that on the 26.

The configuration shown here is the long cockpit option, with a pair of quarter berths. This is the more suitable version for racing. The short cockpit version with transverse double berth under a bridgedeck is also available.

The hull has been extended aft and changed to a counter stern, in keeping with the traditional image. The bow has been cropped and reshaped as a plumb bow.

The transom hung rudder of the 26 has been replaced by an inboard spade rudder in a casette. This will allow the rudder to be lifted out for trailing or access to shallow moorings.

The gaff rig is deck stepped on a tabernacle so that it can be raised and lowered without a crane. It is derived from the Cape Cutter 19 and Cape Henry 21, which are traditional boats with good performance. The big difference is that this design has the spars made from carbon tubes rather than the wooden spars of the other two designs. The lighter rig weight improves stability to carry the large amount of sail area that can be set. We are using outriggers on the sides of the hull at deck level to increase the staying base and reduce loadings on the mast and rigging.

The configuration has been drawn so that it can be sailed as a sloop with a light Genoa or as a cutter with a Yankee in combination with the staysail. The Genoa and Yankee will be on Code 0 type furlers, so they can only be used full-sail and cannot be partially rolled in use. This is because the bowsprit retracts to reduce mooring length, which cannot be done with reefable roller furling systems. It uses the same rotation mechanism as the Didi 26 so that the pole can stow along either side deck. It also allows the pole to be rotated to windward to allow sailing at deeper angles.

The forestay on this design is to the stemhead, not to the end of the bowsprit. The staysail can be hanked or on a roller furler and serves as a heavy weather jib to make a fully-inboard rig with reefed mainsail to keep the boat well balanced.

This design draws on the performance strengths of the Didi 26 and adds the attractions of traditional rig and aesthetics to make it suitable for racing in the "Spirit of Tradition" class in the popular traditional yacht racing of the Caribbean. The extended stern also increases the effective sailing length from that of the Didi 26, for increased performance potential.

Those who prefer a more modern rig would be able to use the standard Didi 26 rig. Before you decide to do that though, consider how much sail area can be piled onto this gaff rig. It has intentionally got masses of sail to keep it moving well in lightest airs, under genoa and full main. The Yankee would serve well as #2 in moderate conditions with full main. As the breeze picks up the first reef should be pulled in and used with the staysail as a working jib for a snug fully inboard rig. By now the sail area is approximately the same as the Didi 26 rig with jib and full mainsail, including roach area. After that, each successive reef in the mainsail removes about 7.5sq.m (80sq.ft), so area can be reduced quickly.

As of March 2013, we also have a smaller cruising gaff rig for this design. It retains the same basic configuration as the bigger rig but with all spars reduced in length. The mast is shorter only in the topmast, stayign unchanged from the hounds down to deck level. The effect of this is to reduce the I dimension of the asymmetrical but not of the headsails. The bowsprit is shortened to reduce the P dimension for both the asymmetrical and the outboard headsails (Genoa and Yankee), so all three of these sails become easier to handle. The main has retained the same luff length but the head, foot and leech lengths have all been reduced. The only sail that remains unchanged is the inboard headsail, which serves as a staysail with the Yankee or as a working jib when the bowsprit has been stowed.

The resulting differences mean that a new builder can choose whether to build with a comfortable gaff rig or the turbo-charged racing gaff rig, with 17% larger Yankee, 24% larger Genoa and main and 27% larger asymmetrical. 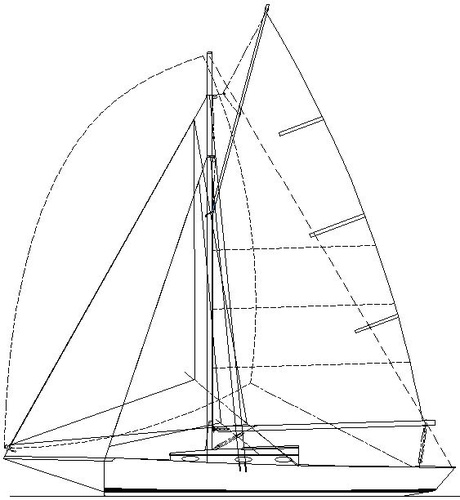