The Nina (LB22) design is based on a "double wedge" type hull. This what the H. Sucher writes about them in "The V-Bottom Boat":

"... The double wedge power launch, so called because its form presents a wedge shaped appearance both in profile and plan view ... modern power boat hulls based upon it are considered by many naval architects and knowledgeable boatmen to be among the best all-around performers" and further " ... the most useful and attractive feature of these launches is their ability to maintain good speed and handle well in rough or choppy water without pounding or undue spray throwing"

Lobster boats, picnic launches and many large sport fishing boats are variations on the double wedge hull shape. Those boats go fast with little power, not as fast as planing hulls (monohedron type) but they keep going at the same steady speed when the planing hulls are forced to slow down. Do a search on the Internet to read more praise about this type of hull.

The Nina is a modern double wedge or small lobster boat. She is light and narrow for her length but will go at 18 mph top with a 30 HP, cruise at 15 mph. She can not take more than 50 HP and her speed will not be much greater with more power.

This boats transom is designed for a standard 20" shaft. The transom can easily be modified to accept other shaft lengths.

While our fiberglass/plywood composite material is 100% original, there isn't anything new in the hull lines. It is a proven type with very predictable behavior. For the looks and layout, we took ideas from several classic designs: the cuddy cabin is inspired by the Atkins design Ninigret, the open version windshield comes from Bolger's Halloween, the engine cover from the Handy Billy that was featured in Wooden Boats. We mixed it all with a touch of Culler's influence and it became the Nina.

Most of those boats have their outboard in a well. It helps to keep the CG where it belongs, looks good and reduce the engine noise. You will barely hear a 4 stroke engine. Each version shows the same forward seats 7' 6" long and wide enough to used as berths. There is room for a portable head under the berths.

The LB22 is a semi-displacement boat and her top speed will never equal that of a true planing hull like the C19, OB19 or C21 but she will keep going fast in bad weather. A hull cross section at the consoles shows an almost round bottom. The Nina is a light (but strong) and narrow boat with less cockpit room than for example, the C21. The smaller cockpit is a good safety factor in real bad weather. The cockpit is self-bailing.

The plans show two layouts that differ mostly by the shape of the coaming cabin side but three versions can be built:

Even the windshield version can be closed with canvas: we show a low bimini top that can be fitted with sides and a snap-on rear curtain.

The fisherman looking for extra cockpit room can omit the closed motorwell and engine cover. The boat can also be built with a center console.

Swim platforms can be bolted on the transom.

As all of our boats, the LB22 can be made unsinkable with foam, see our kits. 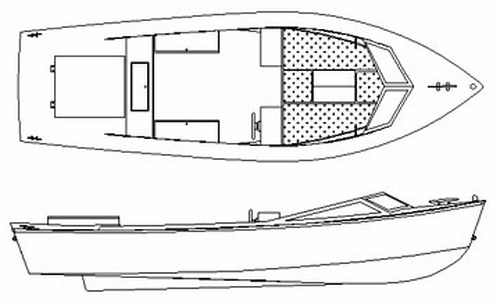 Boats about same size as Nina 22