The XF20 was designed in collaboration with one of our Phantom builders.

Ken Owens, an experienced flats fisherman talked for years about a tunnel hull. He was persistent and we resisted: see our message board archives for some memorable arguments.

Tunnel hulls have drawbacks but many fanatic flats fishermen are willing to accept them to reach those elusive shallow areas where the big redfish hide.

Ken Owens approached us with a intriguing design idea: he had seen an interesting flats boat on Florida's West Coast. This wide and light 20' skiff, built by a fishing guide, captain Henderson, had a tunnel common to many flats boats and looked like an enlarged version of our GF16. The boat had a great reputation.

Ken suggested to enlarge and widen our GF16 then install a tunnel aft.

After seeing pictures of the Henderson skiff, I decided that we could do better in several areas: lighter, better built composite hull and better hull shape. An enlarged GF16 would be easier to pole and behave better at speed. It also looks better than some of the hasty copies of the Henderson skiff that began to appear locally. During our emails and drawings exchanges, we first called her the Cool Boat and what came out of our collaboration is really a cool boat. We kept the rod holder location and designed a poling platform like the one seen on the Henderson skiff.

Features like the light weight, quiet hull and low freeboard for reduced windage are common to many flats boats but here we have a hull that can be built with a small budget and perform better than most carbon fiber machines costing 30K.

The XF20 is light and will run fast with a small outboard. Don't plan on anything larger than 50 HP. Keep the weight and draft low, the trim reasonable. She will top at 25 mph with a 25 HP, 30 with a 30 HP. This boats transom is designed for a standard 20" shaft. The transom can easily be modified to accept other shaft lengths.

The XF20 hull weighs 450 lbs as designed. At a displacement of 1,000+ lbs, equal to two or three fishermen, engine and gear, the draft will be only 3". The buoyancy and stability are impressive: it takes 413 lbs to increase the draft by one inch. 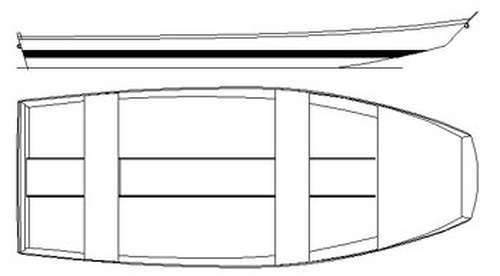