A tiny load carrier for the smaller yacht or launch

Designs come about in all sorts of ways, and this one was more unusual than most. My friend Marcus had been "sorting out" his 19ft long ferro cement Donovan designed keeler and had extracted a casual promise from me that I would design him a tender .

One Friday evening he turned up at our door to tell me that he was "off" on Monday and did I have the plans ready as he wanted to build the tender over the weekend! Of course I had forgotten all about it, so, in order to buy a little time sent him off to buy a couple of sheets of ply and a pot of glue.

When he returned I had the outline done and some of the parts drafted out at 1/5 scale, Marcus took the plan original off to the the copy shop and left the original to me while he went and built the frames. That’s how it went all weekend, I managed to stay one or two items ahead of him and it was with barely set glue and paint still soft that "Roofrack" followed "Roc" out down the channel on Monday morning.

A tender for such a small boat is not easy to design, the boat will be towed a lot of the time so must stay straight and dry at speeds higher than her hull speed, she will have to be able to safely carry a big load when an inebriated crew returns after a party aboard another boat. Lifting the tender aboard cannot be only for graduate bodybuilders and the space available for her stowage limits her size.

All of these were criteria for Marcus, and because of the diminutive size of the parent vessel we had even less room to play with than normal, a tight budget and only two days of building time made it even tighter. I drew this tiny pram with all of these in mind, and Roofrack fulfilled all of the demands made on her really well.

Marcus disappeared off up the coast for several months and returned with all sorts of stories about the adventures he’d had, and told us that the little boat had turned out to be a gem, in spite of the fun made of her by some who saw her my friend was very fond of her and told me that she was as near perfect for the job as one could get.

Since then the boats have been built by quite a few, some in the shortened version which will fit into the back of a medium sized station wagon and most at 2.18 m which carries three plus a few stores comfortably. She is a lot more cute than pretty but has proven much more capable than most expect from such small and simple boats. 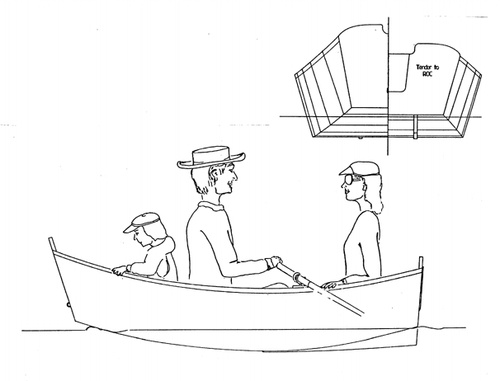