The PH15 (Phantom 15) was designed to answer several requests for a flats boat:

The PH15 shares some characteristics with our Phantoms 18 and 16, in particular the generous beam to length ratio but differs from the 16 and 18 in several areas: the chine is kept low at the bow and the deadrise at the transom is almost inexistant. Those characteristics result from the very focused program of this boat. She is a pure inshore or back country flats boat with no claim to offshore capability. If you routinely cross choppy waters of large open bays or bring more than one passenger, then a Phantom 16 or 18 is the way to go but nothing (except our XF20) will beat this small skiff to reach the extreme shallow waters. The light and small hull has very little windage and make this skiff very easy to pole.

To provide sufficient and balanced lift to the hull despite the relatively large tunnel, we had to move the tunnel forward and this resulted in two sponsoons behind the true transom. This give a stable ride and fast hole shot.

The Phantom 15 is a very light skiff and as such, require less horsepower and less fuel to perform at the same level or better than other boats of the same length. The ideal engine is 25 HP, max. HP is 40. The transom is designed to take a standard 20" shaft, preferably on a jack plate.

Other advantages of the light weight are less hull slap, less draft and to take up less space making it possible to store her inside most garages.

The large deck and wide gunwales (12") provide the same nice uncluttered layout that on the other Phantoms.

One of the unusual features of our Phantoms is their wide beam. This not only increases the waterplane resulting in less draft for the same weight and length but also produces exceptional stability. The boat will barely heel with two fishermen standing on the gunwale.

The low chine of the Phantom 15 results in a very stable foredeck: the Phantom 15 will allow the fisherman to safely walk to the extreme tip of the bow.

A trolling motor fits easily on the wide foredeck and thanks to the width, there is enough room for a forward platform. Under the casting deck, there is room to store life vests, anchor etc. in addition to a fuel tank and trolling motor battery. 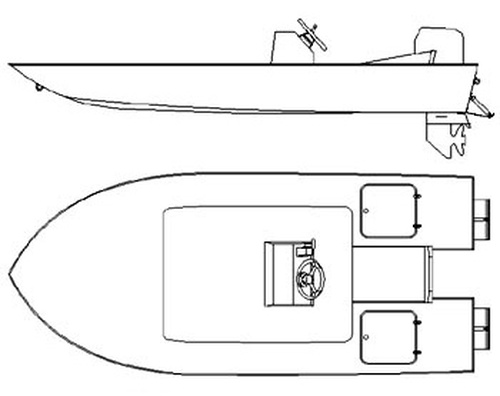 Boats about same size as Phantom 15