The Flats Stalker is a simple but rugged and easy to pole boat designed for hardcore skinny water sight fishing. It is designed for tiller steering first and has a clean open layout that is easy to customize. It will pole effortlessly into the wind and against the tide thanks to it's narrow and shallow hull. Hull slap is almost nonexistent thanks to the absence of spray rails and low chine design. There is even an option showing a rounded chine towards the bow.

Most of our other flats boats designs have an extra wide beam. This gives us a large water plane and results in a very shallow draft. The best example is the XF20 in which we extended the water plane area in an extreme way: 2" draft in a boat that can handle up to 5 people with gear. There is unfortunately a price to pay when poling: you can't easily pole such a wide boat.

Several of our builders requested a narrow light skiff.

Those boats exist since more than 100 years in the Everglades, the concept is not new. Our FS18 is not as narrow as the traditional Everglades Skiff, but it is easy to pole and more stable. The FS18 has the same waterline beam and is just as stable as some fiberglass production boats 1' wider at the deck.

This is a tiller boat but many will install a grab rail in the middle, maybe on a central box. Controls and some small electronics can fit on the grab rail. Stick steering could be nice too.

The FS18 has a self bailing cockpit. Hull draft at 1,100 lbs is 4" and the top of the sole is located well above that.

The FS18 will easily fish two people and you can fish three if necessary. The front deck is big with room for a casting platform. There is usable storage underneath the front deck, even with a portable fuel tank. There is room for rod storage under gunwales: cut notches in the frames.

At the bow, the sides raise a little bit above the casting deck. That little edge is not in the way of a trolling motor mount. It is max. 4" at the tip , only 2" where one normally mounts the trolling motor. Most of the trolling motor mounts clear the deck by more than 2". If not, it is easy to make a raised mount from a couple of layers of plywood epoxy glued to the deck. Another solution is to cut a notch where the motor mounts or to cut the sides down and make her a flush deck but the sheer line will not be as pretty.

However, for thsoe who prefer the flsuh deck (straight sheer) look, the plans include the dimensions for that version. Only the side panel is different. 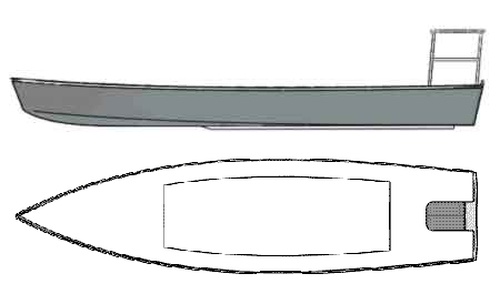